Over the last couple of weeks, the state has made significant announcements regarding road work that will be taking place in the area over the next few years. On May 19th , INDOT opened the bids for the long awaited State Road 45/46 Bypass expansion, and on the same day, Governor Daniels announced an accelerated schedule for I-69 that will bring the highway into Monroe County by 2012, several years ahead of schedule. 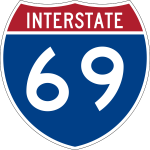 For more than 20 years, the state and the community have discussed widening the often congested and avoided bypass. The Chamber has also made the project a priority, particularly to enhance 21 st century job creation as Indiana University works to build its technology park at 10 th and the Bypass. Through this important initiative, our community can strengthen its position as a leader in technology and bio and life sciences, harnessing IU-led research to bring innovative products to the market through public and private sector partnerships. In addition, the expansion will clear the way to more efficiently bring consumers to the growing College Mall area as well as businesses along and near the Bypass from SR 37 on east. This project is a great ‘win’ for the community, particularly during a time when many states are forgoing road improvements and the construction industry is ailing from the economic downturn. Chamber member Milestone Contractors was awarded the nearly $22 million dollar contract. END_OF_DOCUMENT_TOKEN_TO_BE_REPLACED